Becoming "the boss, of everything"

Pretending to play the piano and violin (he has a home tutor); Escaping

Has dreams of greatness when he grows up, but for now he rolls his eyes at his humorous life in Gorgeoustown

Fujiko Takimoto
Badtz-Maru (バッドばつ丸, Baddo Batsu Maru), a male penguin with spiky hair, is one of the many characters produced by the Japanese company Sanrio and created by Hisato Inoue in 1993. Unlike the more popular Hello Kitty, he has an attitude and is one of the few characters that is marketed to all genders. He was born on April 1st in Oahu, Hawaii.

Badtz-Maru has many different facial expressions and poses, but he is classically recognized for pulling one eye down and sticking out his tongue.

While he seems perpetually stuck in the first grade, he has dreams of becoming "the boss, of everything" when he grows up. "A bit selfish, he tends to make fun of things by thinking silly. This mischievous little penguin loves to fight for the wrong side. His hobby is collecting pictures of bad guys played by movie stars." He enjoys expensive sushi in Ginza.

Badtz-Maru has two best friends, who are often found accompanying him: Pandaba, a female Giant Panda who always is seen in a short frilly skirt, and Hana-Maru, a male white seal.

In addition to Hana-Maru and Pandaba, Badtz also is close with Kahme (a small blue turtle), Iruka (a white dolphin), Sameo (a blue shark), Goro (a small white bird), Anko (a black fish), and Kobun (blue henchman of his father).

In Japanese "badtz" (batsu) is a term for "X", the cross signifying a wrong answer. "Maru" means circle or "O", and signifies a correct answer. So, his name is like "wrong-correct," and is frequently represented by "XO". Indeed, with his friends Pandaba and Hana-Maru, Badtz runs the mischievous XO clan.

Badtz-Maru has gone through many product lines since his release at Sanrio. While he has many fewer releases than Hello Kitty, he has been a staple character found in almost all stores worldwide. He has been portrayed as an astronaut, motorcyclist, DJ, camouflage monster, basketball player, boxer, and others. His products range from typical stationery supplies (eg. pens, notebooks, erasers, pencil cases ...) to more novel items (eg. cd players, guitars, license plate frames ...). 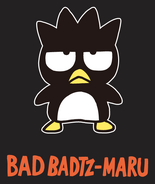 Introduction in The Strawberry News 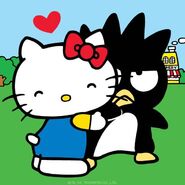 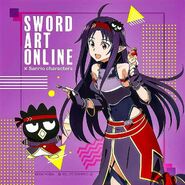 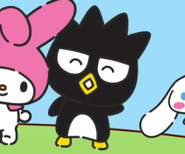 Badtz as he appears in Supercute Adventures