This page is about the Cinnamoangels character Chiffon. For other uses, see Chiffon (disambiguation).

Being a TV Idol; Becoming a true Japanese lady

Her ears are orange or rarely pink (in the manga)

Cinnamoangels (シナモエンジェルス, Shinamoenjerusu) is a trio of Sanrio characters formed by the trendy puppies Mocha, Chiffon, and Azuki.

The three were released by Sanrio in 2005 and has several music videos featuring the trio. The Cinnamoangels made their manga debut in the third volume of Fluffy, Fluffy Cinnamoroll. 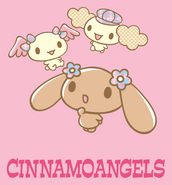 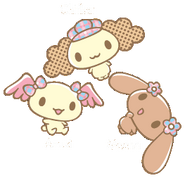 mocha
Add a photo to this gallery

Mocha with Milk
Add a photo to this gallery

Retrieved from "https://hellokitty.fandom.com/wiki/Cinnamoangels?oldid=22090"
Community content is available under CC-BY-SA unless otherwise noted.