Greg Morton
Grinder, a bulldog, is a Sanrio character. He only appears in the television series Hello Kitty's Furry Tale Theater.

He's a classic cartoon bulldog with a large underbite, one visible tooth, a very muscular upper body which contrasts with a small lower body, a small thin tail, and an often squinting expression. He tends to wear cut off shirts as general wear and many of his costumes are ill fitting to show how muscular he is.

He plays a variety of roles in the plays, but is generally an antagonist. Outside of the play structure, he's more friendly with the other members of the cast, though he can be involved in causing problems. During Little Red Bunny Hood, he is shown rehearsing with My Melody and when she gets afraid due to the scary script, he comforts her and suggests to not use the line that frightened her. But other times, he's shown helping Catnip sabotage things. He's generally associated with Catnip, both in the plays and out. She can often be seen telling him what to do or yelling at him.

His dressing room includes work out equipment and he has a gym bag, it seems that athletics are a hobby of his. He's not very intelligent, often misunderstanding what people are talking about or what's going on, and frequently relying on others to tell him what to do in various situations. 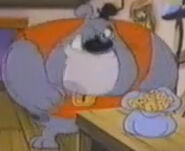