Hangyodon (ハンギョドン, Hangyodon) is a male fish character created by Hisato Inoue from Sanrio in 1985. He was born on March 14th under Halley's Comet[1] and his blood type is B.

Hangyodon is a nice guy who loves to make others laugh, but has a soft spot and doesn't like being alone. He desires to be a hero but his plans of heroism often go awry. Hangyodon also loves collecting merchandise based on himself and is a bit of a romantic despite being somewhat shy towards women, as seen with his various interactions with Kingyochan, his love interest.

In one of his first jobs after leaving Sanrio and becoming a Freelancer, Hisato Inoue was tasked with assisting in the Japanese only 1998 video game Sanrio Timenet: Kako-Hen and Mirai-Hen. While some of the characters may strictly be Imagineer/Timenet's creations, he did talk about his role in the creation of two evolutions of Hangyodon; Great Hangyo and Hangyodon Robo on Twitter.[2] In the staff credits, Hisato Inoue is listed as working for the character design for a company called Inspace.[3] 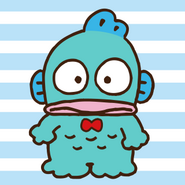 Kingyochan and Hangyodon pictured together in a translated closeup.

Kingyochan and Hangyodon pictured together in a translated photo

Kingyochan and Hangyodon pictured together.

The bittersweet story of Kingyochan and Hangyodon's romance in Japanese from Sanrio Days.

The bittersweet story of Kingyochan and Hangyodon's romance translated into English from Sanrio Days. 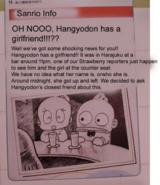 Kingyochan and Hangyodon in a photo featured in Sanrio Design: 70s & 80s and Sanrio Days

Kingyochan and Hangyodon in a photo featured in Sanrio Design: 70s & 80s and Sanrio Days, in the original Japanese

Hangyodon and Badtz-Maru displayed in the Strawberry News in a section showcasing various characters.

Unofficial translation of previous image; 1992 is supposed to be 1993.

Hangyodon and Sayuri as they appear in Sam to Chip no wa Hachamecha Dai Race.

Image showing various characters such as Myme Myme, Tsūru, Buushka, Sumire, and others. Hisato can be seen in the lower right. 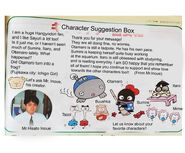 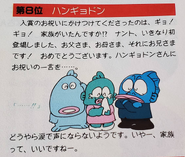 From left to right: Hangyodon's Older Brother, Mother, and Father. 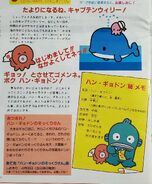 Hangyodon's debut in the Strawberry News