The Duckbill News, Kamonyohashi, My Diary

Atsuko Takagi
The Kamonyohashi Series (Also referred to as The Duckbill News, or simply Kamonyohashi) are a group of Sanrio human characters created by Atsuko Takagi. The series revolves around a boy who is the youngest of five siblings and is the only son.

Youngest kid - He really wants to go to school, but is a bit too young at the moment; he wants to grow up! He also enjoys carrying around a teddy bear named Nentan.

Third daughter - She's all about standing out and wants to be called the queen!

Oldest daughter - Loves to play house and is really looking forward to becoming the best mother.

Second daughter - Tends to act a little bossy due to being in position as the second oldest, but what she really wants to be is a princess.

The Kamonyohashi Series was started when Atsuko Takagi decided to draw some female staff members who were at the time in charge of designing Sanrio clothing merchandise. The drawings became popular enough among the staff that they eventually got turned into official merch such as stationary. The series later got renamed as simply My Diary.

Kamonyohashi is based on the Japanese word for Playpus, Kamonohashi. Presumably the Duckbill part of Duckbill News is also referring to the bill of the animal.

Unofficial English Translation of comic centered around the Hinamatsuri holiday in Japan. 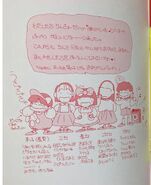 Page from a notebook which contains details of the cast

Unofficial English Translation of previous image.
Add a photo to this gallery
Retrieved from "https://hellokitty.fandom.com/wiki/Kamonyohashi_Series?oldid=21884"
Community content is available under CC-BY-SA unless otherwise noted.