His time at Sanrio and creating Pochacco and Picke Bicke

Minoru graduated from Tama Art University in 1978 with a major in Graphic Design, and later was employed at Sanrio with his job being a Character Designer.

In addition to focusing on the creation of his own characters for Sanrio, Minoru also helped develop:

After leaving Sanrio, Minoru presently works as an independent freelancer who has helped design different characters for children's television, creating materials for younger children including magazines and kindergarten supplies, and even worked in developing characters for Hallmark around 2008. He's also a member of a few online illustration galleries and Dobiren, which is an organization belonging to professional creators who draw children's works. 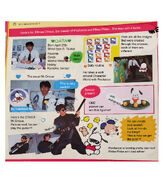 A short article showcasing Minoru with his characters and other information; unofficial English translation.

A photo showing Minoru at his desk, Pochacco merch can be seen in the background.
Add a photo to this gallery

Retrieved from "https://hellokitty.fandom.com/wiki/Minoru_Onoue?oldid=21897"
Community content is available under CC-BY-SA unless otherwise noted.