Rururugakuen (るるる学園, Rururugakuen) are a group of Sanrio human characters created by Cheiko Hara and based in a Japanese high school setting with the central characters being a group of girls named Yoshiko, Tomo, Naomi, Terumi, Maiko, and Chie.

Rururugakuen was first created in 1989 when it's creator Chieko Hara doodled sketches of the Sanrio staff for fun. Those sketches ended up being used for a diary was the first Rururugakuen product made.

After the diary was created, it was soon decided that the drawings and characters drawn for it were perfect for a high school setting.

The name was created by Chieko Hara and Seiji Nakajima, who helped with stocking products for the company. Chieko chose the word Rururu because she loved the way it sounded.

Naomi Takabi (based on Naomi Sakai) was born on August 15th in the historical town of Hanazawa. Naomi was brought up in a very sheltered environment by her wealthy parents. She's a pretty girl with a good mind who hates being dishonest and wants to do the right thing, although she can be rather bossy and a crybaby at times. Naomi loves collecting shells from around the world and regularly takes piano, harp, and English lessons.

Chie Kagami (based on Chieko Hara) was born on December 22nd in Kunitachi, Tokyo. She loves posh things and being fancy. Chie is also a passionate girl but tends to quickly lose interest. She is very expressive with her emotions and is a member of the gymnastics club along with taking dancing and singing lessons, with her stage name being The Cherry Diva. Chie loves to nap at the school's health office and is very flexible both mentally and physically.

Maiko Uoo (Based on Maiko Suzuki) was born on April 6th in Yokosuka. She loves romance and playing volleyball, being able to also check out the boys while practicing. She can easily change herself into a girly-girl in front of other boys. Her rival is Ichiko Hanazono, as the both of them are in love with Hideharu.

Terumi Amada (Based on Terumi Ibuki) was born on December 18th in a countryside town located in Yamanashi. She's a healthy and energetic, positive girl who takes good care of others. Terumi loves to play tennis and has a lot of friends. She is currently dating a boy in the same school she attends called "K", who is an upperclassman and in the tennis club with her. Terumi also likes exercising and enjoys watching F1 races, as the fast cars make her really excited! Her skills include being an incredibly powerful serve in tennis and being the strongest arm wrestler in the school. She also tends to sing songs at the karaoke parlor even when she doesn't know the song. Terumi has a twin sister named Teruyo.

Tomo Tachisute (Based on Hiroko Tomotake) was born on September 9th in Yokohama City, Kanagawa. Tomo is an incredibly positive girl who is the most happiest when hanging out with her friends, which she has many of. She is very strict with time, so Tomo tends to show up 30 minutes early and will get upset at others for arriving late even if it's by one second. She's well organized but once she snaps there is no stopping her. Tomo cannot stay still, so she's always moving and running around with her pet lizard Miyoko. Her skill is her signature Machine Gun Punch, where she will shout loud and swing her deadly arm. She is also a huge gossip queen and like Terumi, she has a twin brother named Tomota. Regarding romance, she is waiting for her Prince Charming to appear someday. Tomo is part of the rhythmic gymnastics club and is a super fast runner.

Yoshiko Tatenori (Based on Yoshiko Tsuboi) was born on July 14th in Ohta Ward, Tokyo. She wears glasses and is an energetic and chatty girl but tends to get quiet in front of Tamio. Yoshiko isn't in any clubs at school and usually goes straight home after school in order to go to live concerts, which she attends at least 5 times each month.

Ichiko Hanazono - Ichiko was born on October 23rd in Noda City in Chiba. Her parents own a cafe and she has a little sister. Ichiko has very few female friends and wants to be friends with Naomi and the others, but she is bad at doing things in groups. She will do anything to get what she wants and boys see her as the "Seemingly cute and timid" type, which is why girls think it's unfair she gets all of the attention. Ichiko is the main vocalist in a high school band (the other members are boys), can surf, and is into 4WD racing. She tends to check out any place where good looking boys hang out. Ichiko is a very good singer (she can even fake sing in English) and has won numerous singing competitions. She is also good at chugging down soda. Her rival is Maiko Uoo, as the both of them are in love with Hideharu.

Hideharu Ohkami (Based on Hideharu Nakamura, who's in charge of purchasing products) - Hideharu (also sometimes referred to as Hide-kun) was born on May 17th in Shinjuku, Tokyo. He is a senior in college and has a father and a mother who is a piano teacher, a grandmother, and a dog named Katrina who resembles him. Hideharu is liked by his friends' moms, especially Maiko's mother. He strongly believes friendships between boys are important and is a nice guy you can depend on, and even though he may seem passive on the surface, he has a soft spot in his heart. His hobbies include riding his mountain bike and karaoke, though he isn't willing to show off his singing skills yet. Hideharu is insanely good at skiing but bad at tennis and is a member of the football team. His best friend is Ushie.

Ushie (Based on Kumi Sato, in charge of planning) - Ushie (sometimes referred to as Ushie Senpai) is a senior who is in the golf club but not actively participating and her golf skills are quite low. She has a bit of a short temper but has good leadership skills and is kind to others. Ushie also has a lesser known mischievous and fun side. Her best friend is Hideharu.

Mr. Shinnosuke Ichigokoji - Shinnosuke is head of the PTA at Rururugakuen. Unlike a lot of the other characters, he is based on The Strawberry King, and can even do magic tricks like the king himself.

Mr. Namba (Based on Makoto Nambada, a golf coach and in charge of handling products) - He is the Principal of Rururu High.

Mr. Ogami (Based on Minoru Onoue, the creator of Pochacco and Picke Bicke) - Mr. Ogami is an art teacher.

Professor Inoue (Based on Hisato Inoue, the creator of various Sanrio characters including Hangyodon and Badtz-Maru.) - Hisato is a biography teacher.

Keiko - Known for being clumsy

Mariko Senpai (Based on Mariko Tamura, in charge of planning)

Akko (Based on Akiko Jii, in charge of designing Minna no Tabo products)

Chaunen (Based on Gota Katagiri, a salesman)

Ohji Hoshino (Based on Kenichi Yoshinaga, in charge of planning)

Honya (Based on Takahiro Katayama, a salesman)

Setsuko (Based on Setsuko Fujii, in charge of planning)

Hiromi (Based on Hiromichi Iwata, in charge of projects)

Originally this comic was printed in a late 80s issue of the Strawberry News, an unofficial English translation is provided down below.

In this comic, the girls of Rururugakuen (Including Ichiko) talk about how they all view romance. 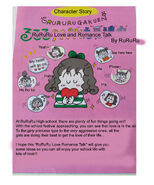 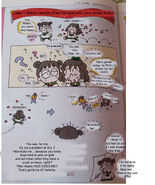 2nd panel centered around Chie. Naomi can be seen in the bottom right. 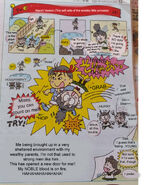 3rd panel centered around Naomi, Chie, and Yoshiko; Tomo is at the bottom right. 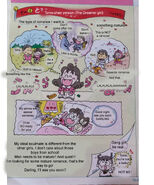 4th panel centered around Tomo with Professor Inoue appearing as well. Yoshiko can be seen in the bottom right. 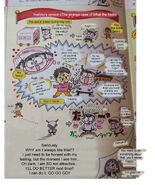 5th panel centered around Yoshiko with Terumi being in the bottom right.

6th panel centered around Terumi and K, Ichiko appears in the bottom right. 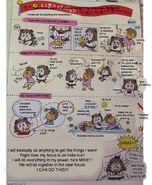 7th panel centered around Ichiko and Hide, Maiko reappears in the bottom right. The line "Just call me Strawberry" refers to her name being Ichiko which is close to the word Ichigo which means Strawberry in Japanese.
Add a photo to this gallery 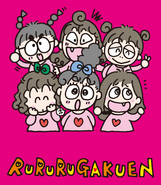 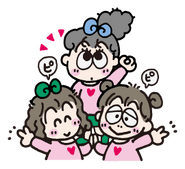 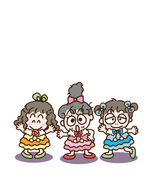 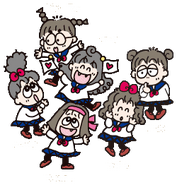 Two early pieces of Rururugakuen merch, which includes the aforementioned notebook where the characters first appeared

An unofficial English translation that tells who the characters were based on and reveals some of the Sanrio staff.

An unofficial English translation of who Naomi, Maiko, Chie, Tomo, Terumi, and Yoshiko were based on.

The original Japanese photo of the staff reveal.

Seiji Nakajima, who came up with the Rururugakuen name and makes appearances as the mysterious nun. SEE TALK PAGE OF IMAGE FOR TRANSLATION.

Retrieved from "https://hellokitty.fandom.com/wiki/Rururugakuen?oldid=21623"
Community content is available under CC-BY-SA unless otherwise noted.