The Strawberry News is a Japan-only print media publication from Sanrio. It is a monthly magazine that started in 1975 and continues to be printed today.

Aside from the magazine containing latest news from the company, it contains many different articles of interest such as crafts, fan art, and answering fan mail. The Strawberry News is also notable for it's contests, where readers (Officially referred to as Strawberry Mates) could send in mail that would determine official character names and even have a chance at receiving exclusive merchandise, at times even signed by Sanrio character creators.

Although The Strawberry News hasn't been officially sold outside of Japan, an English-language magazine by the name of A La Mode was put out by Sanrio in the 90s but soon discontinued. 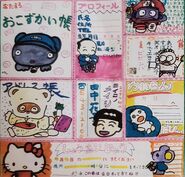 A collection of various fanart of MINNA NO TABO, Culture Shock, The Friendly Club, Otamaro of Hangyodon and more.